In John Hunt’s book “Suffering through strength” he has drawn various maps and on two of these there was a house labelled “The Assistant Manager’s House”. It was located behind what is now known as the CI Club. I am not sure when the Assistant Manager’s house was built but I presume it was in the 1920s. Unfortunately it is now a ruin.

I first caught sight of this ruin in August 2016 when I was walking along the path to the old European Cemetery. There down the hillside below me I could make out large concrete blocks and pillars peeping out from the dense undergrowth. The ruin was so tantalisingly close but I couldn’t see any way to get down to it. The undergrowth made the ground invisible and as I was alone I made the judgement that it just wasn’t safe to try and reach. How frustrating. I was dying to explore it. Then, in 2017 I returned, this time with my sister-in-law Mily. It was October and now the dry season. What was before formidable dense green undergrowth had now died back somewhat and parts of the hillside that were previously overgrown were now visible. We explored along the cemetery path and found a small opening where we could pick our way down safely.

Well! What a remarkable ruin and it was great experience to be able to explore it. And yet, I feel we only scratched the surface really. I think more was hidden than revealed. With no breeze there in the jungle it was very humid so we maybe only stayed for about 45 minutes. In one spot I spied what I think were some of the original linoleum flooring but couldn’t get to it. Mily found a stamped brick. To give some idea of the terrain, there was just a metre of space between us and an area we wanted to explore and yet we could not get safely across the obstacles that were in our path ie. unstable blocks, rocks and undergrowth. 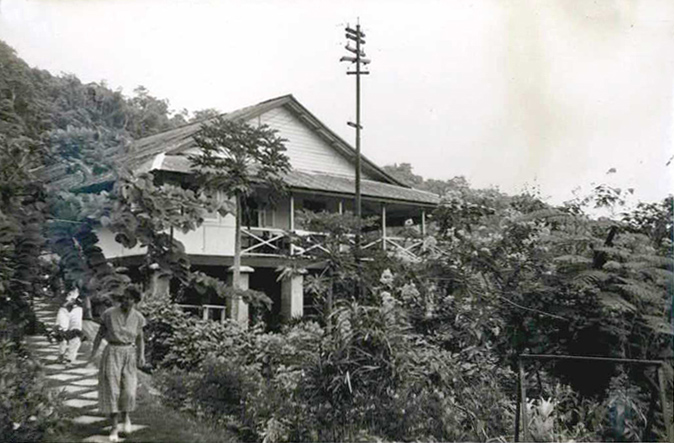 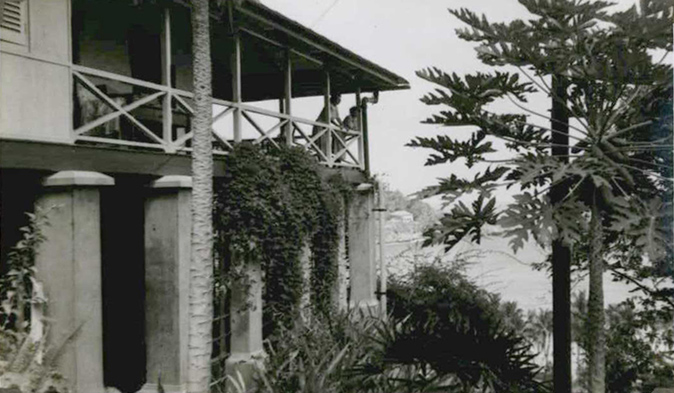 Another photo taken in 1952 and also labelled “Manager’s House”. Here you can see in the background Flying Fish Cove and Tai Jin House. Source: National Archives of Australia PT2069/11, 2

This was once a very substantial house as the photos reveal. An islander friend told me he had once explored it before it was demolished. It had long been empty and that there were many rooms. It would have been a very comfortable abode in its day with spectacular views over Flying Fish Cove.

For a long time I couldn’t find out too much more about this house. I emailed John and he very kindly provided me with further information below.

The Assistant Manager was also the Chief Engineer.  You can see its location on the maps on pages 107 and 195.  The CI Club was the Island Manager’s house from 1925 (page 126).  In the late 1930s it became the European Club.  Late in the 1930s W. B. Jackson was made Island Manager and preferred to live in the settlement past Rocky Point.  The Chief Engineer then moved into the house behind the cemetery.

… It was still being occupied in June 1965, when the Minister for Territories, the Hon. Clive Barnes, was photographed there on the balcony with local dignitaries.  By the 1970s it had been abandoned and neglected and fell into decay.  The decision to demolish it was taken by a meeting of the CI Club members in 1977″.

I then re-focused my searches and came up with another two gems; a view of the house and also a map showing its footprint and the old European cemetery next to it. The house’s identifying number was MQ33 (Married Quarters). 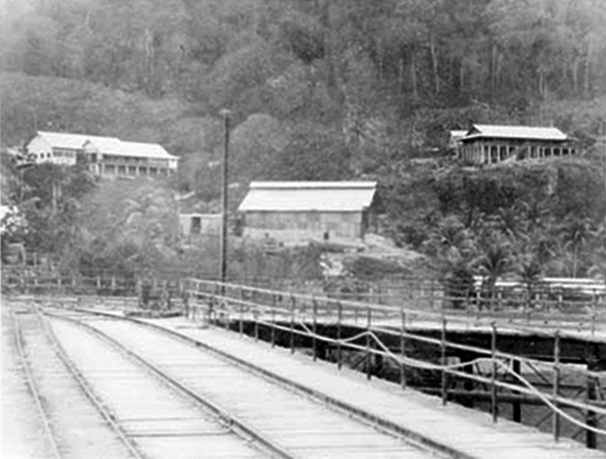 October/November 1937 – Track on Wharf. In the background the Assistant Manager’s/Chief Engineer’s bungalow can be seen (right). The Manager’s bungalow (now known as the CI Club) is to the left. Source: National Archives of Australia R32, CIPC 10/13A 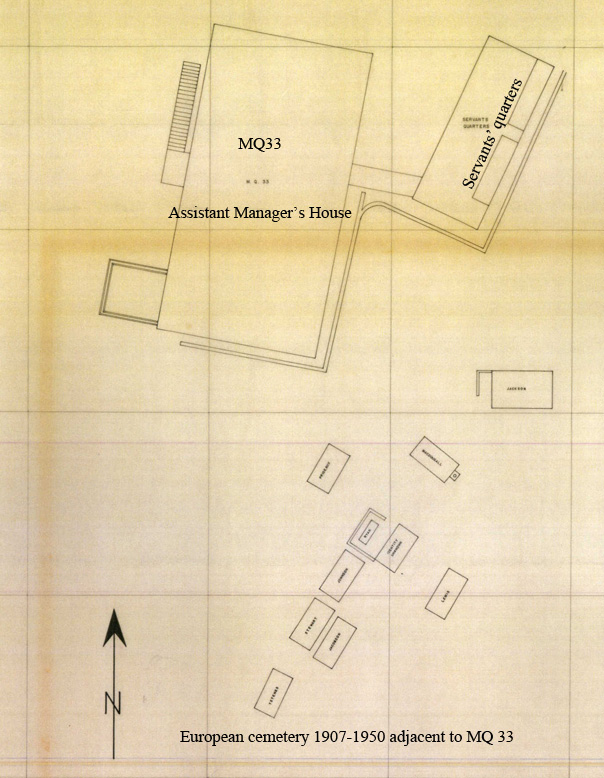 I found the plan map above interesting because not only did it show the footprint of the Assistant Manager’s house it also showed that there were servant quarters as well; something I had been unaware of. Now amazingly, Peter Pang has just told me of his family living in the servants’ quarters and briefly, childhood memories of the site.

My parents lived at the servants’ quarter behind the house after they got married in 1956 because there was no married quarters available for them at the time. The servants’ quarter was bigger than others on the island. It was meant to be temporary. Dad lived with my uncle and my grandparents in the Kampong in one of the servant quarters before then. When they moved in, Mr Bob Forrester and his family were living in the Assistant Manager’s house. At least 3 other European families lived in that house after; as Dad recalled, there were a Mr Jackson (who managed the hardware/trade store) and his family, then there was a Mr Reid (? who managed the radio station) and his wife … Yes it was a beautiful building. We used to play hide-and-seek under this stilt house [Assistant Manager’s house], around it’s garden and the old European cemetery next to it. Scary! As far as I know, we were the last family to live in the servants’ quarter. 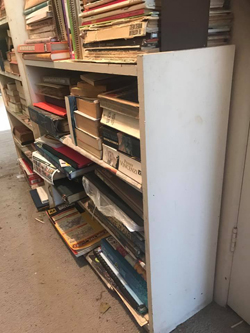 A funny little footnote: A friend of mine who grew up on Christmas Island in the 1970s/80s and now lives in Queensland showed his mum a photo of the Assistant Manager’s House that I had put up in a Facebook group. She then showed him a bookcase that is in her possession that had come from that old house. It now resides happily in Brisbane and is still being used!