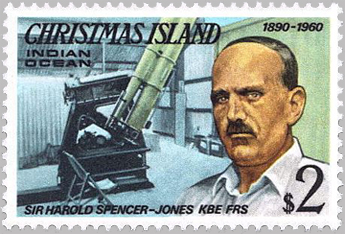 In 1922 a British scientific expedition led by Harold Spencer-Jones, set off for Christmas Island. Their aim was to test if gravity (a large mass) could bend light. This was a part of Einstein’s theory of relativity. In order to do this, they needed a full solar eclipse. (The “why” is explained below in the “Einstein theory expedition” article.) So with 4 tons of bags, equipment and a large telescope they made their way to Christmas Island.

The following is an account by Harold Spencer-Jones, Chief Assistant, Royal Observatory, Greenwich, describing the setup and location of the telescope. He was also accompanied by his wife and you can read about her packing and expectations of the trip here.

The area where Spencer-Jones built and set up the telescope house was at South Point.

… I was able to get the foundation prepared for the instrument. The site chosen was at the south end of the Island, A new quarry is just being opened there, and a railway has been constructed across the Island to bring the phosphate into the settlement. But for this railway, it would not have been possible for the instruments to have been erected there, as the Island is very densely covered with jungle. The telescope was erected just at the terminus of the railway, on a terrace which had been levelled in preparation for the erection of coolie lines. The pier for the telescope was built up from the solid limestone rock, so as to give a perfectly stable foundation, and was constructed of lumps of limestone, cemented together with concrete.

As the expedition was remaining for about six months on the Island, it was necessary to have a more substantial housing for the telescope than is customary on eclipse expeditions. A house had been designed by me before leaving home, and this was kindly erected for us by the Company. It consisted of a wooden framework covered with corrugated iron. The total area was 40 by 20 ft. The observatory proper had an area of 20 ft, square. To east and west of it were two rooms each of 20 by 10 ft., which served respectively as a living-room and a dark-room. The central portion of the roof was constructed to slide back in two halves to east and west, running on rails with double-flanged wheels over the two rooms previously mentioned. The roof was moved by means of cables wound twice round double-flanged wheels, and could be opened without difficulty by one person. The walls of the house were 12 ft. 6 in. high and afforded considerable protection against the wind, which in general was fairly strong.

The erection of the telescope proceeded without hitch. We were assisted by Chinese coolies who worked splendidly. The manner in which they lifted heavy parts weighing several hundredweights by man-handling, which we would ourselves have lifted with shear legs and tackle, was surprising. The only difficulty arose, before the observing house was completed, from the innate curiosity of the Chinese. They cannot resist the temptation to abstract any small piece of brass, etc., which they can detach. This they regard as a good ” joss.” The difficulty was overcome by warning them that the telescope took photographs, and if any of them were to touch it, it would take a photograph of them and they would be detected. Thereafter it was left severely alone. 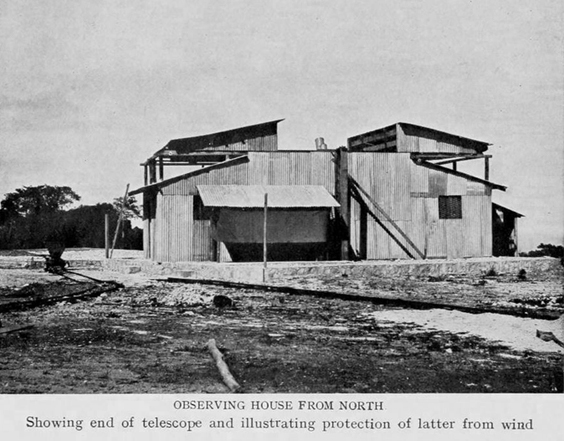 And was the expedition a success? It was to be thwarted, most disappointingly, as explained below. No matter the outcome, Harold Spencer-Jones went on to have an illustrious career. In 1933 he became the Astrologer Royal and in 1942 received a knighthood.

The expedition to Christmas Island, near Java, which went out to photograph the eclipse of the sun last September, has now returned.

Mr. Spencer Jones, who was the head of the party, informed a SUNDAY TIMES representative yesterday that the main purpose of the expedition was to test one of the conclusions of Professor Einstein’s theory that rays of light passing near the sun, or any other massive body, are slightly bent, so that their path is no longer a straight line.

The only practical method is to photograph stars very near the sun and to compare those photographs with others of the same stars taken at night, when the sun is in another part of the sky.

Advantage of Eclipse.
Owing to the brilliance of the sun, the only possible opportunity of photographing stars very near the sun occurs at the time of a total solar eclipse, when the moon passes directly in front of the sun and obscures its light …

Marred by weather.
Unfortunately, after a fine spell the weather broke unexpectedly on the morning of the eclipse, and for four days there was a continuous thick cloud accompanied by heavy rain.

Besides the British expedition, a joint Dutch and German party was also sent to Christmas Island. This party had two large telescopes, and they intended to test the Einstein theory by methods slightly different from those used by the British party. They, also, of course, were doomed to failure.

Moreover, the eclipse this year, though it so favourable as that of 1919, was more favourable than future eclipses will be for some years.

The one hope.
The Lick Observatory party, on the North West Coast of Australia, observed the eclipse under excellent conditions, and, said Mr. Spencer Jones, we are waiting now to learn what results are derived from their observations.

If the results support those of 1919, it will be no longer possible to doubt that the bending of light rays by the sun, as predicted by Einstein, actually occurs. If they contradict them, the question will still remain unsettled, and every effort must be made to test the theory again at the next eclipse on September 10. 1923, which will be visible in California and North Mexico.

It is possible that under the circumstance another British Expedition may be sent.