A memory of Christmas Island as told by Robert M. MacDonald in 1927 with a certain amount of romance.

I have to wonder if the inland cave referred to towards the end of the article is “The Grotto”. it certainly sounds like it. Now that indeed is quite a magical and spiritual place.

One of the loneliest spots in the world today is that little island lying about a thousand miles north-east of the West Australian Coast known as Christmas Island. Yet in the opinion of those whose duty it is to guard, as far as possible the future of the British Empire, it is destined to be one of the important links in the chain of Empire. Standing alone in the Indian Ocean, rising sheer from unfathomable depths, it forms a tropical Gibraltar, which will almost certainly become a base in conjunction with Singapore for the Greater British Navy which the Home Country, Australia, and New Zealand are calling into being, and if the great wars of the future are to be between the packed millions of the old but rejuvenated East and the less densely populated but differently thinking West, that little island may well be the centre round which will rage the future Jutlands.

But Christmas Island also has a past, though there are no written records of it. It is only told in tales handed down by the old Malay pirates, who long ago made it a hiding place for the loot they took from China, India  and Java, and in battle with the early Portuguese and other adventurers who reached the magic shores of India via the Cape. Those stories tell of enormous treasure hidden somewhere throughout the island, fifty square miles of guano-covered, densely-wooded slopes, and even today there are people in the Orient – and one or two at home – who dream of digging up the priceless jewels and sacks of gold which have lain on that world-old spot for centuries.

A Visit to the Lone Island.

Christmas Island was the home, for a brief period two or three years ago, of a party of scientists while studying the eclipse of the sun, but beyond their visit and that of a British battleship on a secret mission last year, few white people have seen the solitary sentinel of the Indian Ocean. Among those few, for a time, were two white men superintending about a hundred Malays in working the rich guano deposits bequeathed to Edinburgh University by the man who annexed the island for Britain (Dr Murray, of Edinburgh – of Challenger Expedition fame.) The writer is one of the remaining old wanderers, and his visit to Christmas Island was not in any way brought about by his own desire. He was a passenger bound from Fremantle to Singapore on board the S.S. Karrakatta and to escape a cyclone, which afterwards heard no ship that encountered survived, she ran for Christmas Island, the nearest land at the time.

Shelter was gained in a bay so deep that the vessel could not anchor, and she was moored to trees on shore with the help of the two Edinburgh men and some of the Malay guano workers. A track had been cleared to a 400 feet summit ridge rising behind the overseers bungalow, and from this point it had been the daily habit of the white men to scan the horizon for the smoke of passing steamers.

The island was a little world in itself. Coconut palms reared their swaying stems along the beach, and tropical fruit of all kinds grew in heterogeneous confusion, where seeds had once been dropped, and the original growths of the island had allowed the new plants to spread or intertwine but under foot, unrecognisable from hard rock, the entire island was solid guano to a depth unknown.

Tree Climbing Crabs.
Tree-climbing crabs were the feature of the island, and one did not go near them intentionally, although they were considered a great edible delicacy by the Malay coolies. Those creatures emerged from the sea in processions, and, climbing high among the foliage of tall trees, found food in the soft young shoots. They were fierce looking, of all sizes up to a foot in length, and when touched exuded an odor which clung to the toucher for weeks afterwards. The Malays would not deal with a live crab on any account, but they caught them by a ruse. This consisted of tying plantain or other long leaves or grasses round a tree stem as high up off the ground as possible and awaiting the result. When the crabs descended the trees, cat-wise, they mistook the leafy band on the tree for the ground and let go their clutches. The fall killed them, and the coolies then safely collected them.

Another creature of interest was a small brilliantly plumaged bird that fell to the ground if a stone were flung at it whether it was hit or not. The writer had seen those birds before in the Caroline Islands, where their name, “Miss Giddy at Stones”, seems to suggest that the missile thrown, hypnotises them. Beetles of several inches in length were everywhere, and their larvae, found in holes in trees, were also relished by the coolies.

The kava plant flourished, but the soap-like taste of the inebriating drink it yielded when prepared was not liked by the guano workers, and, therefore, it was not greatly used. Wild pigs were plentiful, and many forms of coloured lizards but the writer did not see any snakes. Ants and flies were the chief pests, and they could not be kept out of food. On the high ground in the heart of the island were numerous colonies of sea birds, but they were never molested, and in a cave were bones of some extinct creature which must have been of gigantic size, though the writer had not knowledge sufficient to hazard a guess at its identity. In this inland cave the boom of the sea could be heard, magnified considerably, and a Malay said that the ghosts of dead pirates came up into it from the submerged sea entrance to guard the treasure hidden where what was left of their mortal bodies lay.

When the Karrakata eventually reached Singapore a store ship was leaving for Christmas Island to take off the two white men, and, as far as the writer knows, it is once more the haunt only of the ghosts of pirates, the crabs, and the sea birds. 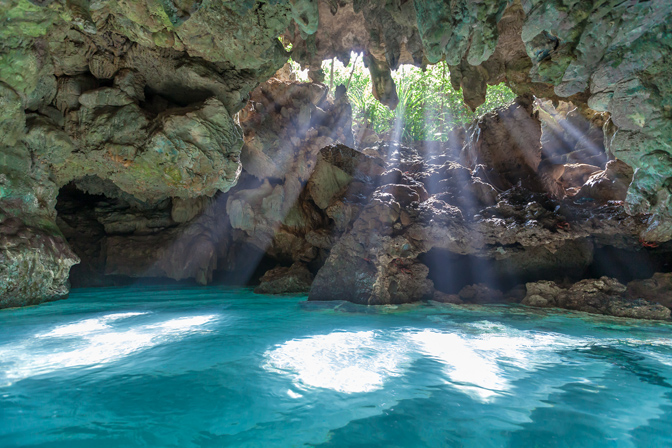