In September 1900, after briefly holding the position as Fourth Magistrate at Singapore, Lewis Hare Clayton was sent, on what was to be a 5 day trip, to report on the fledgling community and mining operations on Christmas Island.

He would later return to the Island in 1901 to the unfolding tragedy of the beri-beri epidemic that would wipe out half the Chinese workforce. Because of that ongoing horror, his second report was scathing in its assessment and he become an advocate for the Chinese workers. I hope to be able to publish that 1901 report on this website soon.

In the meantime, his first Colonial Report No. 319, is published below. I have taken the liberty of adding sub-titles within the report (in bold text) to summarise the different topic areas.

Clayton reports on all aspects of life on Christmas Island. His observations open a door to those earliest days of phosphate mining. The report was encouraging and there was confidence that the mining venture could be a success. However, he had some concerns and early signs of trouble were starting to appear. And, unbeknown to Clayton, the Grim Reaper had arrived. The nightmare of the beri-beri epidemic was just beginning.

SIR,
I have the honour to report that, in accordance with your instructions, I embarked on board s.s. “Sea Belle” in the evening of September 25th. We left Singapore Harbour at 6 a.m. the following morning, and arrived at Christmas Island at noon on September 29th.

I have, &c.,
L. H. CLAYTON.
The Honourable the Colonial Secretary,
Straits Settlements.

With regard to the site for the Magistrate’s house, after talking with you, I think that the best site will be in the coffee garden on the right-hand side of the big rock in the centre of the ground, provided that water is found near.

For the proposed Police Station the site would be in the small site facing the white beach on the right-hand side of the tramway line leading to loading point.

I should be obliged if you could reserve these two sites for the purposes indicated.
Yours faithfully,
L. H. CLAYTON,
Commissioner. 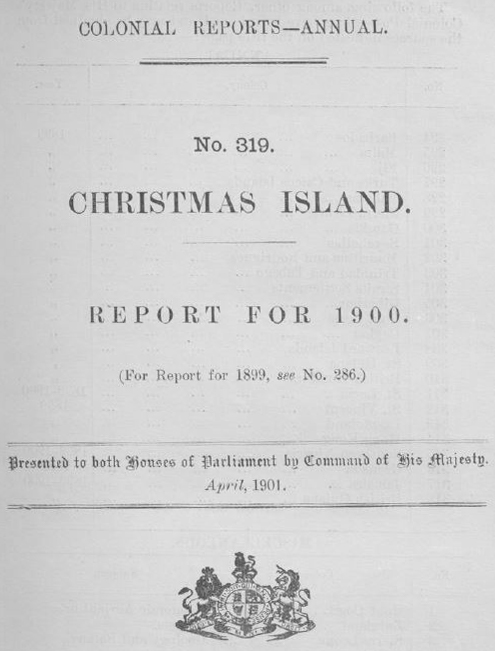