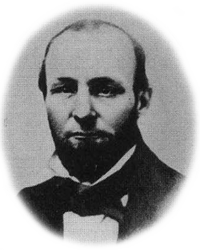 This is a unique and entertaining little excerpt about Christmas Island and though quite short, I thought it should be shared. It is part of the much larger story that an adventuring American dentist, Benjamin Lincoln Ball M.D. tells in his 1855 book “Rambles in eastern Asia, including China and Manilla: during several years’ residence (1848-1850)”.

Benjamin set sail from Boston Harbour, Massachusetts on the 8th May 1848 for a grand 4 month adventure that was to turn into four years. This was a time of sea adventure and exploration; where weather and fate could be unpredictable and navigation difficult. Benjamin would have perhaps chosen the ship and captain with care.

The Thomas W. Sears” is considered a first class vessel – a ship, I think they said, of about eight hundred tons. Captain Graves, from Salem, has the reputation of being a good seaman, and fully competent to the command. Mr Hood, of Salem, and Mr Burgess, of Barnstable, are the first and second officers, and are competent to the discharge of their duties. With these, and twenty fine, hardy sailors for a crew, we, the three passengers, think we shall not regret having committed ourselves to their care for the next four months.

Two months later, in July, he would write about his anticipated exploration on Christmas Island. Captain Graves gave a most imaginative description of the island.

We expect, if the weather holds good, to see Christmas Island towards night. Mr. R. and I think of going ashore, should it be calm when we reach there. It is an island of some three or four miles across, and covered with trees, bushes, and rocks. Only two or three persons have ever landed there. The captain offers to send some men with us in the boat, but will not go himself. He declares there is nothing there but venomous snakes, porcupines, poisonous insects, and a host of wild animals; and he says, “I will not step my foot among the bushes.” However, with pistols, sword-canes, dirks, &c., I think that we may venture to see what they keep there.
…
The captain is at his figures; he has just been taking an observation, but cannot get an accurate one till twelve o’clock. He made out, by dead reckoning, that we are in a latitude 10 deg 3′ south, longitude 105 deg east; and has arrived at the conclusion that we have passed Christmas Island. We are, however, still looking for it.

It is now one o’clock. Our doubts and desires are all settled; we now have the true reckoning, and find that we have drifted twenty-five miles to the westward, by the treacherous westerly current. Had it not been for that, we should not have been doomed to a disappointment. We must give up Christmas Island; and now, then, for Java next, though a sight of that seems dubious; for, of all the land we have passed, we have not yet seen any.

Benjamin went on to have more adventures and if you are curious about this most interesting man, as I was, you can read more about him here.