I have two, 10.5cm x 8cm, original photos that were taken on Christmas Island between 1900-1902. They are of the first kongsi in Settlement and they hide a historically significant detail, but more on that later.

The kongsi’s location was once upon the site of the current Settlement supermarket. (In 1918 it was replaced with a “new kongsi”).

The kongsi was part of Ong Sam Leong’s (b1857 – d1918) business. Ong was the labour supply contractor to Christmas Island, recruiting the Chinese labourers and their overseers, the mandors. The kongsi would have provided him with an additional lucrative and monopolised income stream.

He [Ong] opened a kongsi (Hokkien: business arrangement which includes store) to supply extra food at high prices. Opium and gambling were run from the kongsi and prostitution was later introduced.

Ong Sam Leong is also mentioned in the article “Heaven and Earth on Christmas Island” pondering his possible involvement with the Hungmen (洪門).

The group of men are mandors, clerks and two Sikh watchmen. The seated man in the front is the previously mentioned Ong Sam Leong. John Hunt identified for me the seated man at the top of the steps to the left with the dark hat. He was Koah Seng Kim who was the “towkay” (Chinese employer also known as the “Island Chinese Manager”). He was on the island from 1900-1902. The menacing looking men with the rattan canes (for beating the coolie workers) are the mandors.

Note the partial view of the building to the right. This was the “Contractors Store”. To the left are five coolies and Koah Seng Kim is seated on the verandah to the far right. The mandor sitting on the verandah above the five coolies has a long queue (pigtail) that can be seen clearly. This was a Manchurian hairstyle imposed upon the Han Chinese. It signified Han submission to Qing (Manchurian) rule. The Han were also forced to change their clothes to Manchurian style as well. 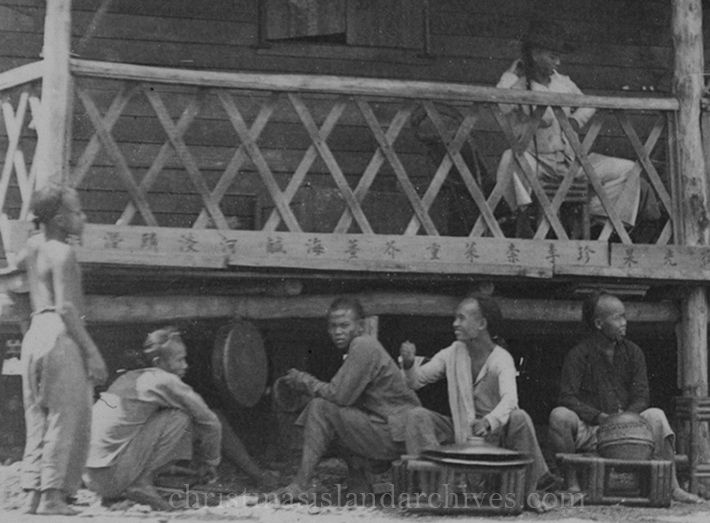 These photos are important because of their rarity and subject matter. But there is something much more. They hide a historically significant detail and it was only when I scanned the photos at 1200dpi that this became apparent. It is the Chinese characters across the verandah and around the doorway! And, it appears that these two photos were taken at different times as the characters are different on both photos.

What do these characters say? They come from an amazing classical poem dating from the Liang Dynasty (502–557) and known as The Thousand Character Classic.

The Thousand Character Classic (Chinese: 千字文; pinyin: Qiānzì Wén), also known as the Thousand Character Text, is a Chinese poem that has been used as a primer for teaching Chinese characters to children from the sixth century onward. It contains exactly one thousand characters, each used only once, arranged into 250 lines of four characters apiece and grouped into four line rhyming stanzas to make it easy to memorize. It is sung in a way similar to children learning the Latin alphabet sing an “alphabet song.” Along with the Three Character Classic and the Hundred Family Surnames, it formed the basis of literacy training in traditional China.

So far, I have a partial translation for two sections of the verandah. It is quite wonderful. Thanks to my sister-in-laws Pauline and Kay who spent time “nutting out” the characters. And then onto Hock Ng who identified that they were in fact part of the classic and providing the following translation for which I am immensely grateful. (Translations for other parts of the verandah and around the doorway for these photos will be provided as they are deciphered.)

Part of Chapter 1 from the classic. (Angled Kongsi – left verandah)

金生麗水, 玉出昆岡
Gold was produced from the Lishui River, and jade was mined from Kungang [Kunlun Mountain]

劍號巨闕, 珠稱夜光
The sword was called “Juque”, the bead was called the called “Yeguang ” [Yeguang is a type of stone that is luminous at dark, hence the name Yeguang Zhu/Luminous bead]

果珍李柰, 菜重芥薑,
The most precious of the fruits were plums and cherries. The most important vegetables were Chinese mustard and ginger.

海鹹河淡, 鱗潛羽翔
The sea was salty and the river was fresh; the fish snorkel in the water and the birds fly in the air.

Part of Chapter 2 from the classic (Front Kongsi – left verandah)

龍師火帝, 鳥官人皇
Dragon Master, Fire Emperor, Bird Officer, Ren Emperor [these were all the officials of the ancient time].

推位讓國 有虞陶唐
Youyu and Tao Tang, the last two legendary emperors of ancient time who were selfless, and they took the initiative to abdicate the throne and Country given to the sages.