V.E. Mathew (Vadakethu Easaw Mathew) lived on Christmas Island between 1939-1971 and variously held the positions of:

The following is an excerpt taken from his autobiography. It focuses on the time he was on Christmas Island during the Japanese occupation. He was a man of faith and gained comfort during frightening times knowing that his God was with him. And, it was Mathew’s experience of air raids in Singapore that was to save his life on Christmas Island. He recognised the whistling sound of a dropping bomb and with seconds to spare, escaped with another man from the wireless station before it was obliterated by a direct hit. It was just prior to that shelling, as the wireless operator, that he sent his final message “Christmas Island under attack. Invasion by Japanese imminent”.

… After three days in Batavia Harbour, we sailed again bound for Christmas Island and arrived there on 15th February, the day Singapore surrendered to the Japanese. Since it was wartime, we took a zigzag route and so delayed our trip to Christmas Island. which took about seven days when normally would take three days. When Islander was being unloaded, it was torpedoed by a Japanese submarine an we received orders from Head Office to leave the Island immediately. As soon as the passengers – that means those who were not needed for essential services on the island – most of the Europeans and a few Asians, the last batch of evacuees were ready, the steamer sailed for Fremantle, Australia on 18th February.

I wanted to go to Australia but was told I was of essential service as radio operator and also I was in the Medical Auxiliary Service. After the Islander sailed for Australia with most of the company management staff, there was no work being done on the island. We all had nothing much to do. There was a Medical Auxiliary Unit formed on the island to give first aid in case of bombing under the guidance of the doctors on the island. We were ready for any eventuality.

The first air raid was on 19th February and three Chinese died because of the bombing and a few others were seriously injured. I was able to give first aid to one Chinese man named Ng Toh Kiet who had a very deep wound on his thigh with a splinter. He was later in the hospital and got well. He was able to walk about to do his work. After giving first aid to this man, I went round Malay Kampong and found the people were still hiding in the air raid shelters. When I told them that the planes had all gone, a few people were injured and needed medical treatment immediately. I also gave first aid to a few Malays also.

When I called them out only then did they come out of their shelters. The District Officer was very pleased with my service and gave me a letter of commendation. Though Singapore had fallen we still had to keep our wireless schedules. On March 1st while I was on duty in the wireless station, I heard the whistling sound of the bomb being dropped and I told the Sikh watchman at the station to run away for safety and I also just ran in time out of the station. God showed me a safe place to take shelter only a hundred feet or so behind the station under a projecting rock and the station had a direct hit by a high explosive bomb. 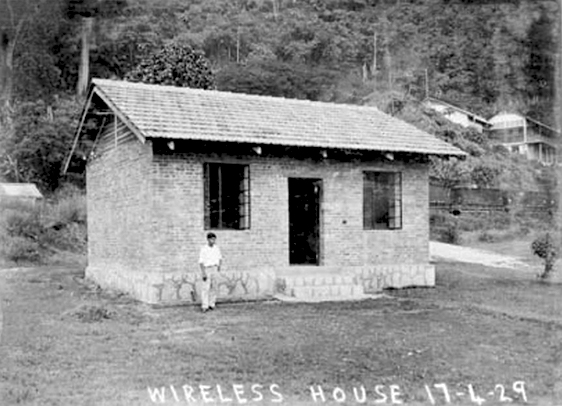 The wireless station before the war
National Archives of Australia – NAA: R32, CIPC 7/21A

Nine other bombs were dropped at the same time in different places near the station. The crater formed because of the direct hit on the station was about ten feet deep. Where my chair was in the station. I had a bicycle leaned against the wall of the station and not a bit of it was seen after the bombing. The transmitter and other equipment in the station had gone flat. When my friends who were hiding in the hills nearby saw the dust and smoke from the station, they came running to the station thinking I was certainly dead. By that time I got up from my hiding place and I told them how my God had saved me wonderfully. After that I had nothing much to do because the wireless station was bombed and no other way of communication from the island. Everyone just waited for the Japanese to arrive. Then on March 11th there was a mutiny on the island. The small detachment of the British Army stationed on Christmas Island to guard the island – Five British officers and twenty-seven Punjabi Mohammedan soldiers. One night the soldiers shot and killed the officers and threw them in the sea. The next day in the morning, they came and told me to inform the Japanese about the mutiny and that they were ready to receive them. I told them there was no way of contacting the Japanese because the station was bombed and not a bit of the station could be seen anywhere.

Now there was no work on the island and people just waited for the better or worse to happen. So we, the six of us used to go to the hills and we picked up blue crabs, plucked coconuts and mangoes, guavas, chilli padi, etc. There were plenty of sweet papayas in the forest. There was even a cashew nut tree but no fruits at that time. We had to wait only about twenty days for the Japanese to arrive.

Then on 31st March Japanese started shelling the island and early morning on the 1st of April, they started to land about one thousand soldiers. They had huge barges in which they brought plenty of provisions and other cargo that they took from the Dutch godowns in Indonesia. Most of the people on the island ran to the nearby hills and hid there. My five friends and I went and waited at the piggery, which was about two kilometres from the wharf.

At about 9.00 am the Japanese came to that side on the bicycles they took from the Malay kampong. As soon as we saw them, we raised our hands and stood there. They examined us for any weapons. We told them that we were Indians but they thought Indonesians. Then we told them India and the name of Gandhi. They were happy to hear Gandhi’s name and whenever they saw us they would mention Gandhi. He was the man fighting against the British using non-violence policy.

After that we didn’t have any trouble from them. The Japanese doctor who came with the landing party could speak English and he started a school to teach us all Japanese. We were about thirty of us in the first batch and after three months, there was an examination and I passed second highest in the class. The doctor was very pleased with me and he used to come to our house regularly. He would bring saki, the Japanese wine and Thomas, our cook would bake tapioca cake with grated tapioca and coconut which we could get free from the forest.

One day the doctor and a few soldiers called us to the hospital quarters for drinks. They gave us this rice wine to drink and biscuits and cakes to eat. The rice wine or saki is a very sweet drink. They warm it and serve in small bowls not in glasses. That night they gave me a bit too much and I was afraid that they would get angry if I didn’t drink. So I kept on drinking even after my friends left. I was alone and I could not walk home. In the early morning, when I came to my senses, I was in the drain near the hospital. That was the first and last time I got drunk.

Few months after the landing party arrived, the civilians also started to come and they restarted all the businesses including the phosphate mining and the offices and stores. Since there was no wireless station, I was put in charge of the trade store with a Japanese boy as my boss. The food provisions and other necessary commodities were supplied to the people from the store free of charge. This Japanese who was with me was very nice to me and he would listen to me whatever I told him.

The Europeans also used to come and get their provisions from the store. I gave them peanuts and other items beyond their share with the Japanese permission because it was needed to prevent beri-beri. This Japanese boy was very fond of games and wanted me to go and play tennis and football in those days. The company people were polite and sociable. The company manager once requested me to write a sort of history of the island till the Japanese landed. When I gave him the completed report, he was very pleased and gave me a present, one roll of khaki cloth, which was very hard to get in those days.

I was invited for lunch at Mr. Oorloff’s house and so I had to come early alone. I told my friends about it and came away alone carrying some mangoes in my hand. The distance from that place to the house was only two miles and there was a clear footpath for us to walk. We had been that way several times before and I just walked as I used to do. But someway or other I lost my direction and started to roam around in the forest. From 10.00 am to 3.00 pm, I walked up and down in the forest without finding the sight of the path. I became so puzzled and scared and didn’t know what to do and started crying and became desperate. At that moment only I thought about the God I knew and the prayers and Sunday school teachings. At once I knelt down in the middle of the forest and prayed to God to show me the way. As soon as I opened my eyes, I saw a footpath just in front of me and heard a cock crowing. I walked to the direction of the cock crowing and within two minutes I was in the house of a Chinese man who looked after the Grant’s well pump. I did roam about seven miles from our house and a Chinese friend of mine, James Kang was there with his motorcycle and I got a ride on his bike.

First thing I went and told my friend Mr. Oorloff why I didn’t turn up for lunch and my story. Then I went to the house and told my friends who thought I was in Oorloff’s house so they didn’t go out looking for me either. That was another occasion when God answered my prayers immediately. Again the life on the island went on smoothly. The provisions in the store were getting less and less and no ships were coming to the island. Then on 17th November 1943, one Japanese ship was torpedoed while loading in the cove by American submarines. So a month later in December 1943 without much notice eight hundred of the civilians, the European prisoners of war and the Indian policemen and troops were taken to Surabaya in Nanyo Maru, a Japanese mine laying ship. We were told that they would send us to Singapore to join the Subash Chandra Bose’s Indian National Army. Any way since we arrived in Surabaya there was no way of us going to Singapore. …

This excerpt is taken from the V.E. Mathew autobiography courtesy of the Mathew family.