From the Island’s earliest settlement days until the 1990s, the Christmas Island Hospital had been located in Settlement on Gaze Road (in the early days known as “Waterfall Road”). In 1995 it was replaced by a new hospital built on Phosphate Hill Road. The “old hospital” as it then became known (current buildings built and extended between the years of 1930-1970), was eventually converted into very comfortable holiday accommodation.

However, these were just the latest incarnation of even earlier hospital buildings. I say “buildings” because they themselves were originally in different locations and had variously been burnt down/removed, damaged and destroyed by storms.

Firstly, there were hospital wards and a beriberi hospital. A 1901 map shows these structures. There was also a notation that the four hospital wards were to be removed. Using a map overlay you can see where these wards and beri beri hospital were approximately located. The burial ground was located at the top of the map. 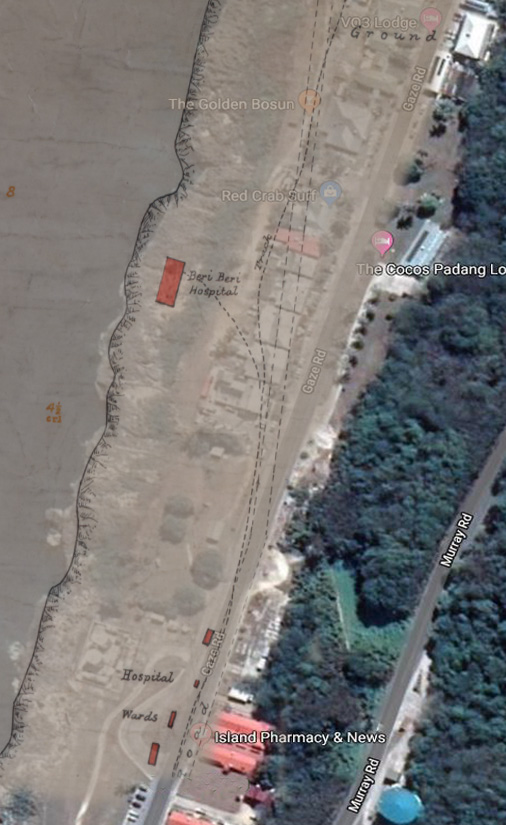 A couple of years later, the “hospital wards” shown on an early map above are gone. 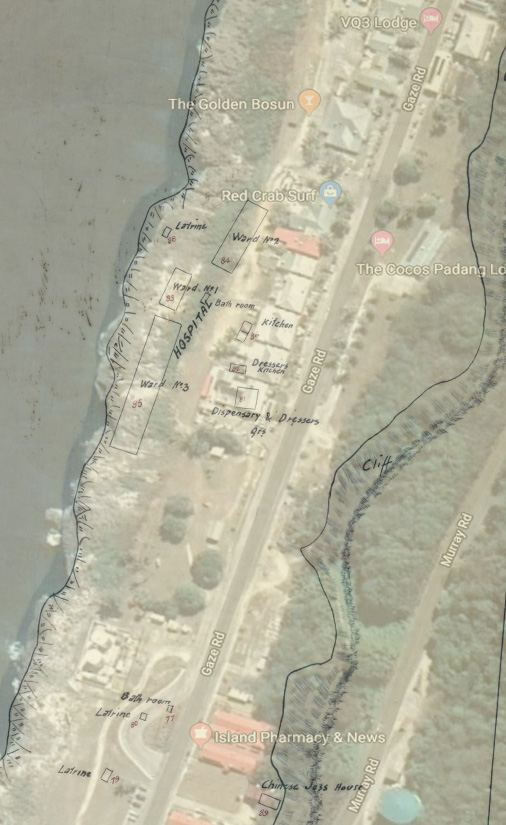 The original beriberi hospital is now labelled as “Ward No. 1”. It is interesting to note that on Google Earth there appears to be scarring on the cliffs where the hospital wards 1 and 3 were located. These map overlays are not perfectly accurate but they do give a good indication of what was where when.

Also, I have an original photo of the beriberi hospital when it was just a stand alone building. Unfortunately that original photo is terribly faded but I was able to bring back much of the detail.

It was during this restoration that I was able to see men on the verandahs. They were previously invisible.

In the enlarged image below you can see a man on the left laying on the verandah; his arm over his face. Further along you can just make out the bare legs of another man. It appears he is laying on his stomach and a man is squatting next to him. Keep in mind that the time period of when this photo was taken, at least 404 men had died from beri beri; probably more.

A 1916 map shows 2 new hospital buildings were built further away from the cliff edge and were located at approximately where the barrarcks shops now sit. Ward No. 1 (original beriberi hospital and ward 3 are now gone); having being badly damaged by the 1908 storm (photos above).

The 1910 photo above was labelled “damage to the old hospital by the sea”; the words “old hospital” indicating that any surviving buildings there after 1908 were no longer in use as a hospital.

The magnificent photos of the hospital facilities below (before their destruction from the storm) provide an absolutely fascinating and clear glimpse into the past. They were taken by Dr William MacDougall during his time on Christmas Island between 1904-1908 and featured in his thesis “Beriberi on Christmas Island with special reference to diet” that you can read in full here. 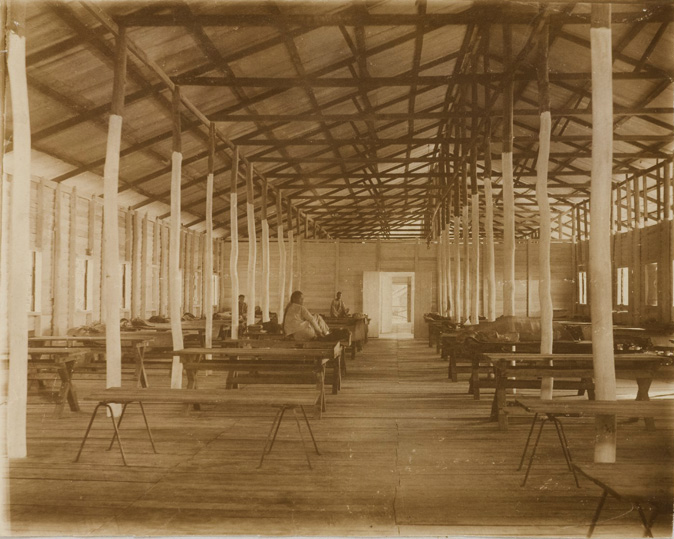 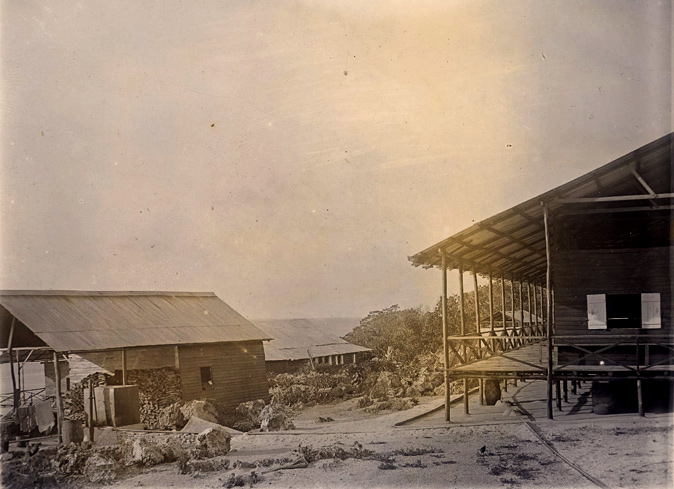 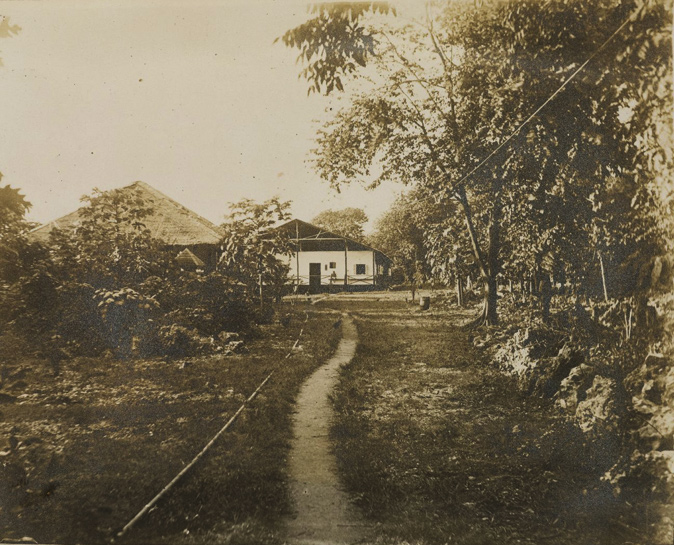 Label on photo says “Main hospital in distance : Dispensary”
© William MacDougall. University of Edinburgh, Edinburgh Medical School thesis and dissertation collection
This photo appears to be even earlier than the ones above as the Dispensary appears to have an atap roof. 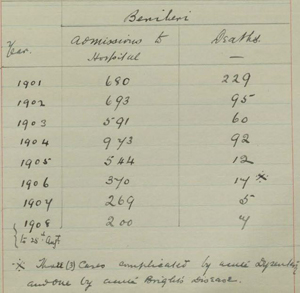 Beriberi is a thiamine deficiency (lack of vitamin B1) and was a scourge that ran rampant through the coolie population in the early years of mining on the island. Bear in mind that at this time the cause of beriberi was unknown though diet was suspected to be linked.

In his thesis Dr MacDougall gave the admission and mortality figures for beriberi. The statistics were alarming. Dr MacDougall stated that Beriberi soon appeared in the coolie population after the commencement of mining in 1898. There was no qualified medical man until 1900 and that statistics only started to be kept from April 1901. If the death statistic for 1901 (from April) was 229 men, could one assume a similar figure for the preceding years? And, according to Clayton [a civil service officer] 80 men had died from the beginning of October 1900 until March 1901. John Hunt’s book delves into the story of beriberi on the island in great detail.

I find the two photos below, of the same man, rather poignant. Statistics are one thing but he puts a human face to the suffering of this disease. He was in the hospital for an unbelievable 3 1/2 years! 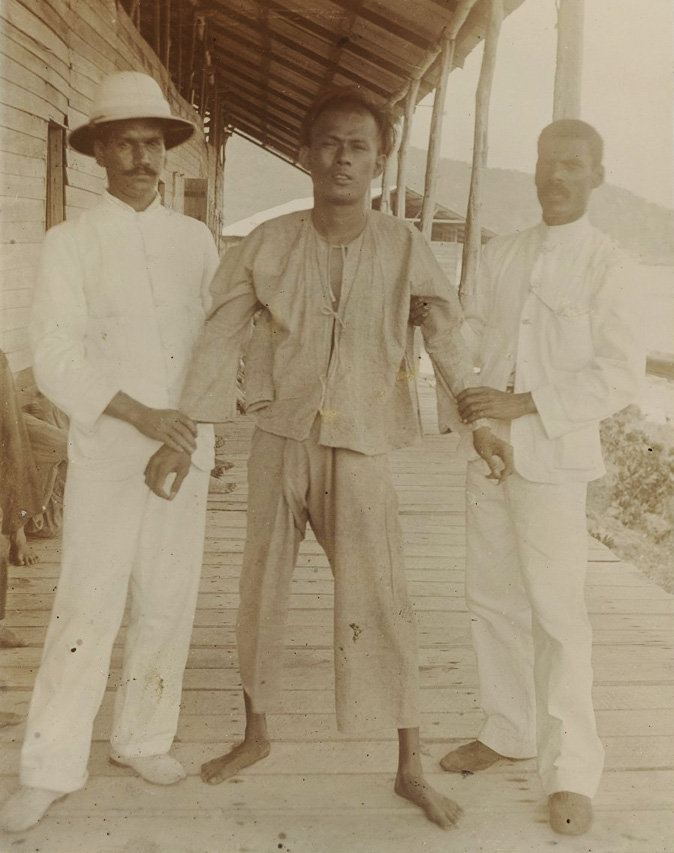 In Dr MacDougall’s thesis he says of this man “I had one case that lay almost inert for 2 1/2 years and at the end of 3 1/2 years was sent back to China able to walk, slowly with the aid of a stick it is true, but able to look after himself.”

I wonder what became of this poor man after he returned to his home in China. Did he fully recover? We will never know. So many of his fellow workers never left the island alive having succumbed to beriberi.

More than 80 men had died from the beginning of October 1900 until March 1901. The burial ground was only 220 yards (200 metres) from the hospital and was filling up fast. Coffins were found by Clayton [a civil service officer] to be less than 6 inches (15cm) below the surface – a clear health hazard. On his recommendation this practice was stopped, and in April 1901 the bodies were exhumed and reburied about a mile (1600 metres) along the coastal track to Waterfall … The original graveyard is clearly shown on a 1 January 1901 map. In the 1960s when the foundations were being dug for the new nurses’ quarters close to Rocky Point, dozens of pigtails of human hair were discovered – all that remained on the site of the young coolies who had been buried there.

John Hunt, Suffering through strength, page 27 and 28
The nurses’ quarters are now known as the VQ3 Lodge.