Following on from a previous published article on this website “Thugs flee to Christmas Isle” are two earlier accounts with mentions of secret society activity. They date 1946 and 1956.

In this first account, it is alleged that South Point triad members were deported to Singapore in 1934/35. Years later, in 1946, Lam Hong who makes this allegation, and who still works on the Island, is apparently fearful of retribution.

The following information may be of use to you; the source is, for the most part, one of the timekeepers employed by the Christmas Island Phosphate Company by the name of Lam Hong. The complete absence of pre-war records here makes it virtually impossible for me to check more than a very few of the details.

2. During the year 1934, or during the early months of 1935 a large number of coolies, stated to be about one hundred, were removed from their place of employment, the phosphate quarries (South Point, Christmas Island) under police escort to Singapore. They were presumably dismissed by the Company prior to their departure from the island. The reason given by Lam Hong is that they were allegedly members of the triad society who intended to establish themselves on the island. The District Officer at that time was Mr. D.Gray, M.C.S., and he may recollect the details of the incident provided it did occur. (Mr. Gray was succeeded in turn by the following Malayan Civil Service officers:- Messrs. R.W.I. Band, N.L. Alexander, G.W. Webb, R.N. Broome, G.W. Davies, R.W.I. Band, T.P. Cromwell, any or all of whom may have seen what confidential papers there were on the subject).
[Note in margin]: (Lam Hong can vouch for one other, Lai Chuen being implicated; he has not been seen since 1935.)

3. Lam Hong states that the activities of the society were brought to light through the Government clerk who was in the island at the time, Mr. Yip Sau Foon, and who reported the matter to Mr. Gray. Two of those removed and alleged to be members of the society were Ch’an Chi Fei and Leong Keng. They, Ch’an and Leong were under the impression that Lam Hong was responsible for the information which led to their dismissal. “upsetting their rice bowl” as it was put, and, according to Lam Hong, threatened to murder him if he ever set foot in Singapore. This warning was repeated in a message from Singapore some three months after the removal of the hundred men.

4. Nothing more was heard on the subject till May, 1946, when the “Islander returned, on the 28th, from a trip to Singapore bringing back with her one T’am Chan, who had been on a visit to Singapore. He stated recently to Lam Hong that Ch’an Chi Fei and Leong Keng were still in Singapore and were doing well, a remark which Lam Hong interprets as another warning. In any case it appears to have had a profoundly upsetting effect on him as he is under the possibly correct impression that the Company is to dismiss him when the “Islander” next sails for Singapore, about September this year. Dismissal normally means leaving the island but it has been obviated temporarily by my taking Lam Hong on as a gardener, with a view to allowing further investigation of this case.

5. I have no wish to keep Lam Hong here permanently, he wants to return to China, incidentally, by any route other than via Singapore, nor can I vouch for his being entirely trustworthy. However, I am satisfied that there is something which is frightening him and his story may be true. I pass it on mainly for its bearing on the triad society which may or may not be operating in Singapore as such.

6. Lam Hong further states that two others, Lee Tok and Yong Wan, who left here for Singapore by the “Islander” on 25th April this year, have also threatened him as they believed him responsible for their dismissal. I do not think there is much in this beyond the fact that Lee Tok has knowledge of the activities of Ch’an Chi Fei and may provide a means of tracing the latter. It ought to be possible to trace Lee Tok through the Chinese Protectorate quoting my letter D.0.X.I.32/46 dated 15th April, 1946. Lee Tok, as far as I knew him, was a general nuisance and could be expected to stir up labour trouble locally whenever the opportunity presented itself.

7. Finally a clerk, James Kang Tiang Kwang1, employed before the war by the Company should have knowledge of the activities of the Triad society at South Point in 1935. He was recently in Outram Road Jail serving a sentence for collaboration (my letter to the Superintendent, D.0.X.1.6/46 dated 15th March, 1946, refers). In view Of Lam Hong’s anxiety that his name should not be associated with the disclosure of any information it might be advisable to leave any approach to James Kang till I can make it on my return to Singapore in September next. My bargain with Lam Hong is that I shall do what I can to ensure his protection provided he gives all the information he can. He with be kept here till you can advise on what should be done.

1. James Kwang (1905-1947) was a collaborator on the island during the Japanese occupation. His actions were reported to the re-occuping forces in 1945. You can read these in the pdf document “Re-occupation of Christmas Island – reports”. In 1946 James Kwang plead guilty to all charges. 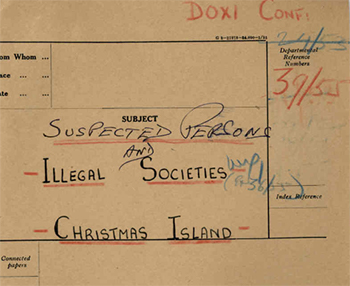 I wonder what became of Lam Fong and if he ever made it back to China?

Ten years later is another account. This time in the form of a police statement. This one provides small extra insights into the gangs even including the joining fee. As in the “Thugs flee to Christmas Island” story, once again the 08 secret society is mentioned.

Accused states: I was born in Singapore. I can produce my birth certificate. I am illiterate. I was never educated in Chinese. I am at present living with my father at the above mentioned address. He is employed as a labourer in the Singapore Harbour Board.

On 1.9.1950 I went to Christmas Island where I was employed as a labourer at a salary of $1.75 per day. I am still working in Christmas Island. I used to come to Singapore regularly every 6 months.

I was not a member of any secret society when I was in Singapore. On my arrival in Christmas Island in 1950 I was approached by one AH CHUI to become a member of the “08” S/S. I paid an entrance fee of $10.80 to AH CHUI to become a member of this secret society. Thereafter I paid a monthly subscription of $1.00. There are between 20 – 30 members belonging to the “08” S/S. All the members of the “08” S/S are male Chinese. AH CHUI is employed together with me as a labourer. The other members are employed as labourers, drivers etc. on the Island.

Since my arrival on Christmas Island in 1950 the “08” S/S and the “36” have never clashed. But there have been arguments between the labourers belonging to both the secret societies over work. The headmen and the police usually intervene and settle any trouble.

I came to Singapore from Christmas Island about a month ago. I shall be returning in about 3 weeks time.

I was never arrested in Christmas Island for the past 6 years in connection with any offence.

In 1949 I was arrested in Singapore once in connection with secret society activities. I have never been convicted for any offence.

The earliest brotherhood on Christmas Island was the Hungmen (洪門) or the Heaven and Earth Society (天地會). You can read about it here.