During the Japanese occuption of Christmas Island in World War 2, a Shinto shrine was built. It was located near the current Catholic Church further up the hillside. When the British reoccupying forces arrived in October 1945, the Islanders, having been forced to worship there, requested that the shrine be burnt down. However, they did not want to be present. The reason for this is alluded to in one of the statements below: “They were disturbed in case there should be some truth in Shintoism.” This truth was that the shrine would have been built to house the “kami” and now their house was about to be burnt down.

Kami is often translated as “god,” “lord,” or “deity,” but it also includes other forces of nature, both good and evil, which, because of their superiority or divinity, become objects of reverence and respect. The sun goddess Amaterasu Omikami and other creator spirits, illustrious ancestors, and both animate and inanimate things, such as plants, rocks, birds, beasts, and fish, may all be treated as kami. … Kami are manifested in, or take residence in, symbolic objects such as a mirror …, in which form they are usually worshipped in Shinto shrines.

On Christmas Island, were the kami in the form of spirits/dieties or were they part of the surrounding forces of nature and the landscape itself; the essence of the place?

Whilst on the Island recently, I was fortunate to meet Mio Seamder who is currently working there and I’m grateful that she was able to give further insight into the Japanese cultural beliefs of kami:

Shinto kami, they are sacred and admired but also people are somewhat scared as well. For example, Japanese people used to believe that we had to look after kami by providing offerings of food, dance, music, prayers etc. The tradition continues and very often you still see people offer food, sake, water etc. to kami. The idea is, if you look after kami, kami will look after you. If you do not look after kami or do anything to anger kami by wrongdoings, then the angered kami would cause things like natural disasters and contagious diseases. So, Shinto kami is capable of both divine and evil. That may be why the Islanders were especially scared about burning the shrine.

Each shrine has goshintai, or representation of kami. It can be a rock, tree, mirror, sword etc. Sometimes the whole mountain itself where the shrine is located.

I’m curious to know what goshintai this burned shrine had …

If the goshintai was a mirror, sword or some other removable object it may have been taken by the Japanese when they left the Island. Alternatively the goshintai may still be present in some form of the surrounding landscape of the shrine site. Perhaps the entire hillside itself.

I am also very grateful to Russell Payne who provided me with a sketch, drawn from memory, from his time when living on Christmas Island. It shows the site of the Shinto shrine and the surrounding area with step structures etc.

The hillside is choked with coral vine that covers everything. With local knowledge of the site fading through the passing generations or those who have knowledge of it no longer living on Christmas Island, this makes the map below particularly valuable. Click on it to enlarge to full size.

How was this wooden Shinto shrine constructed bearing in mind it had “many examples of exquisite carpentry”? Was it “flat packed” which would mean invading forces transported this on their ships? Or, less likely, was it built from scratch and carved on the Island by a Japanese craftsmen turned soldier? What Russell has to say in answer to those questions makes sense:

Apparently these shrines were in a kit form and were sent to most places of occupation during the war. They were all made from a particular timber and were jointed and dowelled. No nails were used in their construction. 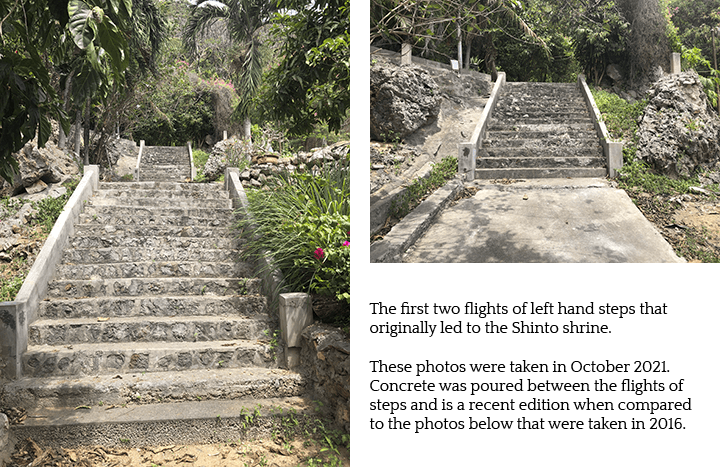 The only clearly visible remains today of the Shinto shrine site are the two flights of left hand steps ascending up the hillside and the first flight of steps on the right hand side of the old tennis court.

At the bottom area of the second flight of the left hand steps are two column type structures; one on each side. Mio informed me it was likely that guardian animals (and messengers to the Gods) could have been here. They may have taken the form of lions or foxes or perhaps some other animal. A torii (Shinto gate) would have been either at the top or bottom of the steps being the gateway from the mundane world into a sacred space.

The first two flights of right hand steps that I have seen are of a different construction in terms of material, style and size compared to the left hand ones. Due to their proximity to the CI Club built in the 1930s and that there was a lawn bowling area that was likely there before the war, I believe the steps were built by the Europeans but utilised by the Japanese for their shrine site.

In a 1996 travel guide, it was stated that the shrine overlooked gardens where a disused tennis court now stands and that “each of the steps were marked by an arch.” 1

This is a unique and special archaelogical Japanese war time site on Christmas Island where parts are in imminent danger of being lost forever. It needs to be restored and preserved.

Finally, below is a list and diagram illustrating the most important parts of a Shinto shrine: 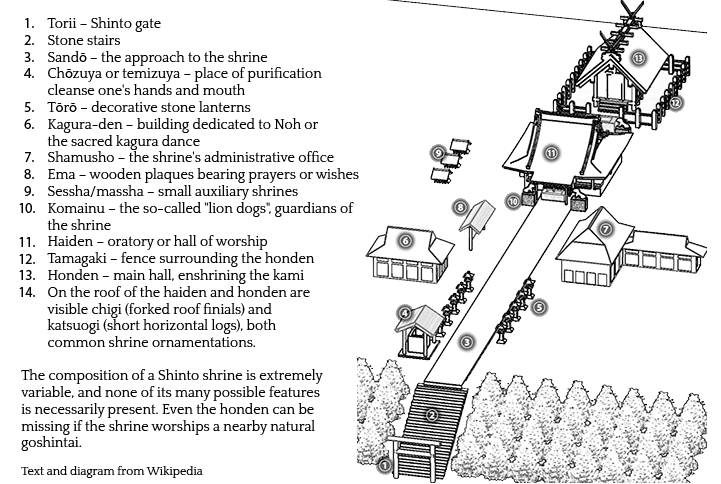 The above article contains a term that reflects Lieutenant Hall’s historical view and those of the period in which his statement was written and would be considered inappropriate today. It is provided in historical context.