In 1852 the Dutch barque Vice Admiraal Rijk was voyaging from Ramsgate to Batavia (Jakarta). Disaster struck on the 28th June when the ship was grounded on the south-west point of Christmas Island (Egeria Point). Out of a contingent of twenty men, only four managed to survive by clinging to the roof of the floating deck-house that had separated from the sinking ship.

The hapless men drifted to the north-west point of the island. Then another fight for survival as they clung to treacherous rocks in a rough sea trying to reach the safety of landfall. One of them did not survive that ordeal. 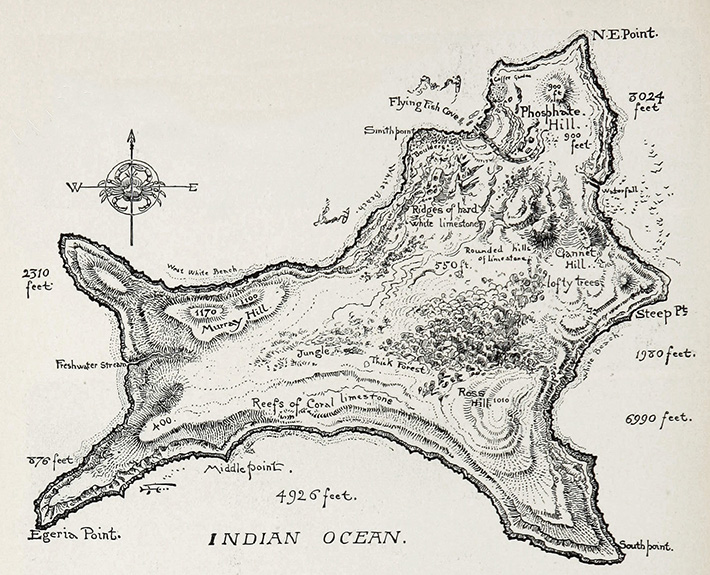 Eventually, after nearly two miserable months battling to survive on a wild and uninhabited Christmas Island, the remaining three men were rescued by the passing ship Amicitia.

One of those, Roelof Arnold Herman Tollius Bennet, would later write about the horror of the shipwreck and being marooned for 56 days. You can read his account here.

And oddly, the day after their rescue, a large fire was spied on Christmas Island by the captain of another passing ship. Had there been other survivors?

The following is a newspaper article reporting the story of the shipwreck and eventual rescues.

The Dutch ship Amicitia on the 23rd of August last, took off from Christmas Island the Chief mate, Peter Graat, and a sailor, Carel Kipping, belonging to the Dutch ship Vice Admiraal Rijk, and a passenger Mr Tollius Bennett, who had been living on that island for 56 days in a state of the greatest misery, under the following circumstances. The Vice Admiraal Rijk, Captain Bakker, with a crew of 19 men, and one passenger, Mr Bennett, sailed from the Texel on the 13th Feby. last and from Ramsgate on the 7th March last, with a cargo of piece goods, bound to Batavia.

On the 27th June at ll o’clock P.M. the Chief mate was relieved in his watch by the commander, at which time Christmas Island was distant about 2 miles and a half to the North North East, the ship’s course being north. About half past 4 o’clock on the morning of the 28th, the Chief mate was awoke by the second Mate calling out “there is a heavy squall coming up – put the helm up” and running on deck found the ship had grounded and was filing fast. He then cut the fastenings of the boats, but as the ship was rapidly sinking all hands took refuge in a small boat which was hanging in the davits, which unfortunately turned over and all the people in it fell into the water, except the Chief mate and Kipping, who succeeded in leaping on to the poop which had separated from the rest of the ship. Here they were joined by Mr Bennett and the cook E. Hollander. The ship bad gone down by this time and there is every reason to believe that the rest of the crew, including the master, were all drowned.

By 4 o’clock in the afternoon they reached the shore at the N.W. point of the island, where they had great difficulty in landing on account of the high sea which was running, and by which the cook was dashed against the rocks with so much violence that he was stunned and being drawn by the waves into the sea again was drowned.

With much difficulty the Survivors reached the higher part of the shore where they found some fresh water, which greatly revived them. They then sought for some food but could find nothing but a couple of birds, which they succeeded in killing and were obliged to devour raw.

The night they passed upon the damp ground on which they spread some leaves of trees. Next morning on examination they could find nothing to eat, except the birds that they succeeded in killing, and which alter dipping in salt water they exposed to the sun for a couple of hours; there were no wild fruits even, and they in vain tried to produce fire. They made a kind of hut with the branches of trees and leaves in which they spent thirty three days in a state of the greatest misery.

A small flag which they bad found in the poop was fastened to the end of a pole and fixed in the top of one of the highest trees, in the hope that it would be observed from a passing ship, but although they saw twenty ships sail past the island they did not succeed in attracting notice.

Observing that the ships approached nearer to the S.W. point of the island they proceeded there and arrived after a journey of eight days and planted their flag on a rising ground, which it took them two days to climb on account of the steep rocks of which it was composed.

On the 23rd August the flag was observed from the Amicitia, from which a boat was despatched and brought the three survivors of the Vice Admiraal Rijk on board.

The Captain of the Dutch ship Olivier van Noord having on his arrival at Batavia on the 30th of August, reported that about 9 o’clock on the evening of the 24th be had observed a large fire on Christmas Island, it was hoped that some more of the persons belonging to the Vice Admiraal Rijk might be still alive and H.N.M. Steamer Samarang was immediately despatched in search of them, but all though an anxious search was made and a number of guns were fired, no traces could be found of any person on the island, and the Steamer returned to Batavia.