I would like to give thanks to Harchand Singh Bedi, who lives in Malaysia, for allowing me to republish his interesting article below. His story shines a light upon the small community of Sikh policemen who had a very long presence on Christmas Island starting from its earliest mining days. You can learn more about Harchand and read his other informative articles here.

Today Christmas Island is home to a population of around two thousand people, the majority of whom have Chinese ancestry, with a sizable minority of people of Malay heritage. A lot of whom were initially drawn to the Island to work in the Phosphate Mine. The diversity of the settlers’ native tongues and cultures has influenced the island’s own culture, as evidenced by the range of ethnic festivals held throughout the year. 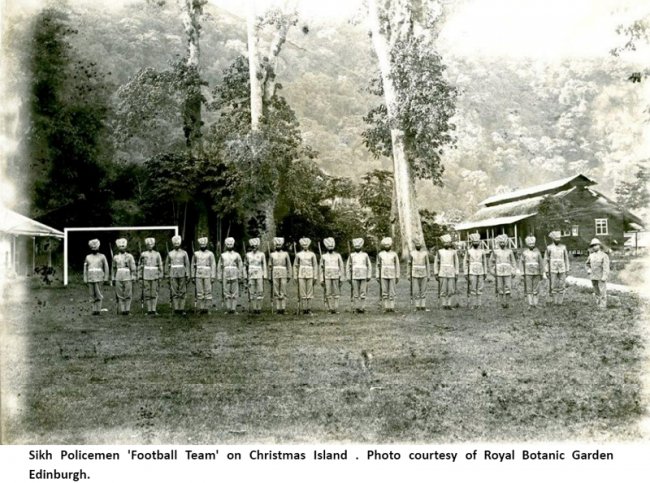 Christmas Island’s connection to Sikh policemen goes a long way back, with a history of maintaining law and order on the island, dating back to as late as the 1800’s. A small detachment of Sikh Policemen drafted from the Straits Settlements Police force were sent to Christmas Island.

Have you ever heard of Christmas Island?

Of course, natural curiosity wants to know what on earth a man could do on a lonely bit of small remote island on the edge of the Indian Ocean like that? Let’s take a step back in time & explore the Island’s hidden history.

Far away in the Indian Ocean, and some 250 miles to southward of Java Head, lies Christmas Island. The Island, rich in natural resources, caught the eye of the British. It was annexed by the British Crown in 1888 and placed under the administration of the Governor of the Straits Colony in Singapore. The island was the smallest and most isolated portion of the Straits Settlements.

In 1891, a 99-year lease of the Island was granted to George Clunies Ross and John Murray, and six years later Christmas Island Phosphate Company was formed and took over the lease, to work the deposits of phosphate of lime. The phosphate industry, to which Christmas Island owes its importance, had its beginnings early 20th century. The discovery of phosphate guided the island’s destiny for the next century.

Workforce were mainly Malayan and Chinese

In 1898, 200 Chinese labourers, 8 European Managers and 5 Sikh Policemen arrived on the island to make up a workforce supplemented by a small number of Malays.

By 1901, from small beginnings the colony on the island had gradually grown, and the number of inhabitants went on increasing with the extension of the phosphate business and the development of agricultural and other industries. The inhabitants’ number 13 Europeans (including a mine manager, a doctor, a chemist, three ladies and children) 500 Chinese labourers, 30 Malay boatmen and 13 Sikh policemen.

By 1905, Christmas Island exports of phosphate had reached 97,942 tons. The island’s annual report that year showed that there were 1,061 inhabitants comprising 10 Europeans, 6 Eurasians, 952 Chinese, 42 Malays, 38 Sikhs (Sikh policemen and their families) , eight Japanese and five others.:~ Source: Report on Christmas Island 1906.

There was a need to guard the phosphate industry and its employees. There were jobs as “jagas“. Jaga is the Malay word for ” watchman”. The Sikhs, being a robust lot and renowned for their fearlessness, powerful physiques and dignified but awesome appearances, were prized for their capabilities as soldiers and members of the police force. 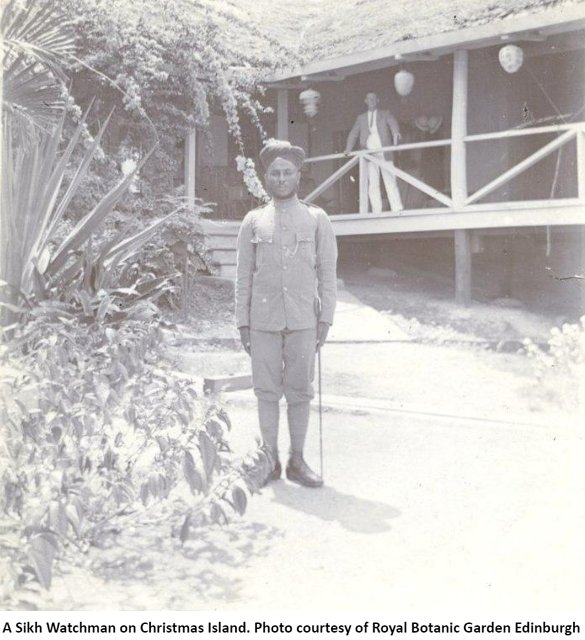 It was those valuable reputations that earned them the trust and respect of the many establishments that later employed them in unskilled and low paying but very responsible posts. Several Sikh jagas, was also employed to guard the company and its assets.

The main religious institution of the Sikhs is the “Gurdwara” (temple), which literally means “gateway to the guru”. Wherever the Sikhs were in sufficient numbers, they built their Gurdwaras and installed the Holy “Guru Granth Sahib” (Sikh Holy Scripture) therein. 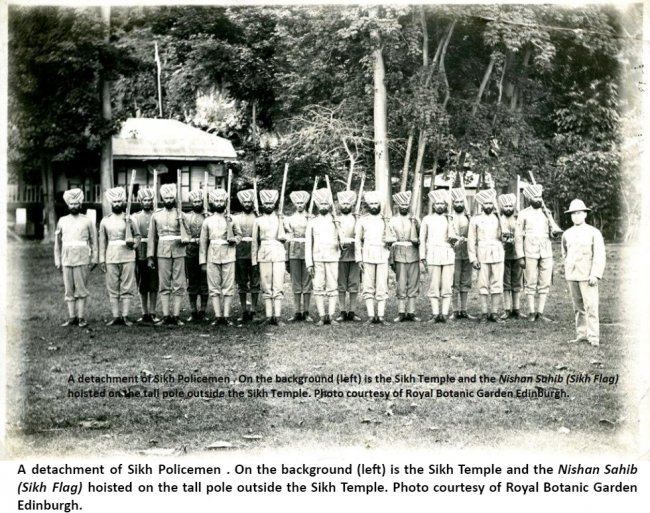 At the beginning, these Sikh policemen had their barracks, where they had a small Gurdwara Sahib near the field. Religious services were initially held here. However, as the community grew, the temple facilities in the police barracks became increasingly inadequate. In 1936 the existing “Gurdwara Sahib” was demolished and a new one was erected.

Dr. James Cyril Dalmahoy Allan was the medical officer on the Island’s hospital and the following interesting fact is mentioned by Dr. Allan in his memoirs:-

On the 18th October 1908, in a letter to a friend he wrote: “… There is the Hindoo temple where the Sikhs worship – the low and prolonged trumpeting of their horn is even now calling all true believers to worship, and the Sikhs in their wonderful Sunday turbans and loose white shirts are going past the verandah as I write, with their pots of beaten brass – and with them I daresay one might not seek in vain the Comforter.” 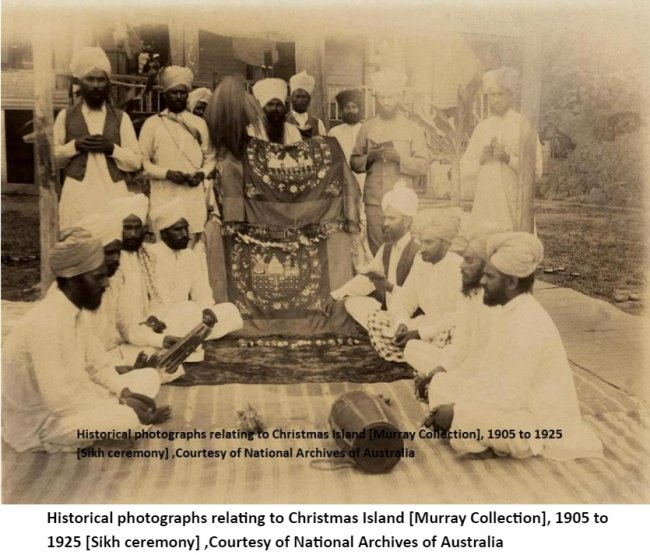 The company’s steamer would make fortnightly trips to Singapore 800 miles away, bringing all the latest papers, books and magazines. There were many recreational activities like billiards, tennis, cricket, hockey, football and sports on the island.

Sport has always played an important role in maintaining the Police Personnel’s, and the company’s employees, fitness and morale. ‘Sports Days’ were held to give service personnel a break from their duties. The European staff were also actively involved in sports. These included building physical fitness, boosting morale and encouraging cohesion among employees and staff. It played an important role in maintaining discipline. It also helped to relax during times of stress and to relieve boredom. 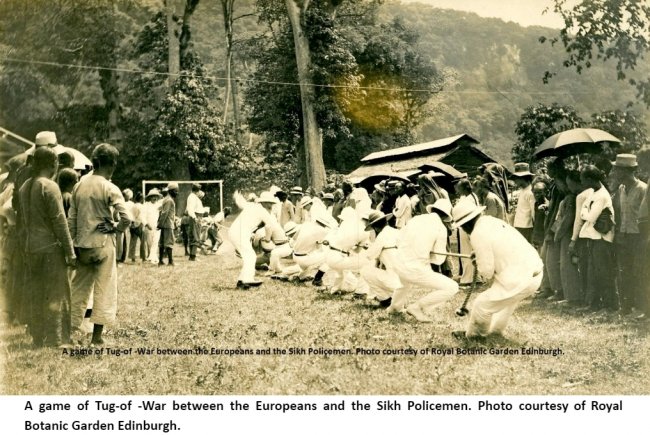 Football appeared to be a favourite pastime on Christmas Island. The Chinese had a good soccer football team. Usually, when the steamer calls, the officers and crew think they can run rings around the Chinese players, but they generally wind up by getting well beaten. The Sikhs were good at football too. They had a good Hockey and Tug-of-War team as well.

Amusements were provided and Chinese were allowed to gamble between 7 and 9 o’clock each evening. Some Sikh Policemen and watchmen were able to carry out secondary activities in the form of money lending which subsequently became a popular and lucrative activity on the island to supplement their savings. 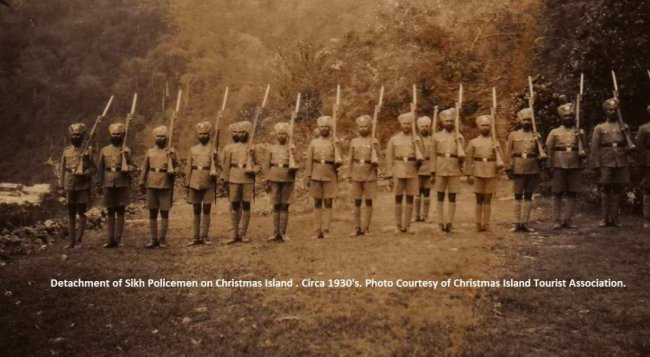 During the years there were frequent disturbances on the island. However, the Sikh Policemen had maintained the law and order on the island efficiently. In November 1913, the adherents of a Chinese attacked the police who were taking him to jail. Next day a band of more than 100 struck work and came to the office to intimidate and demand his release. The District Officer was compelled to order the Sikhs to disperse them which they did so effectively that the strike collapsed at once. The leader was sent away to Singapore.

The Sikh Policemen had established their superiority as loyal and effective policemen and continued to maintain law and order until the 1940s.

During the outbreak of Second World War in SouthEast Asia in December 1941, Christmas Island was a target for Japanese occupation because it was a perfect control post for the east Indian Ocean and it was an important source of phosphates, which were needed by Japanese industry. For the Island’s defence, a six-inch naval gun was installed and manned under a British officer and four NCOs supported by 25 Indian soldiers.

On 15 February 1942, Singapore surrendered to the Japanese and radio communication with the colonial administration was lost. Anticipating the Japanese invasion, a party of 8 Sikh policemen and their family members total 28 of them were evacuated to Fremantle, Australia on the steamer “TSS Islander“. The Japanese forces invaded the island on 31 March 1942.

The Indian troops garrisoned on the island staged a mutiny. The mutineers surrendered the Island on 31 March 1942 to an occupying force of 850 Japanese soldiers and construction staff. The Japanese quickly took over the fort, the phosphate plant. Occupation was a particularly difficult time for the Islanders from food shortages and forced labour.  In December 1943 the Indian soldiers, Sikh policemen, and internees along with several hundred islanders were sent to Surabaya leaving about 500 people behind.

After the war, the island became a Colony of Singapore and a detachment of Singapore police was sent to the island. Following the acquisition of the island by Australia in October 1958, the Singapore Police remained on a contract basis until 1962 when legislation created the Christmas Island Police Force.

In the later part of the years, constable Hardial Singh was among few Sikh policemen who were employed to keep the peace and enforced the law on the island. He served with the Singapore Police Force from 1965 to 1975.

He joined the Australian Police Force and served on Christmas Island from 1975 till 1986. Hardial Singh retired as a Sr. Police constable, and he is residing in Western Australia today. When contacted, he had many stories to share about Christmas Island. He said that there were remnants of an old pedestal where the Nishan Sahib (Sikh Flag) was at one time ago, now there is tall mango tree growing there. 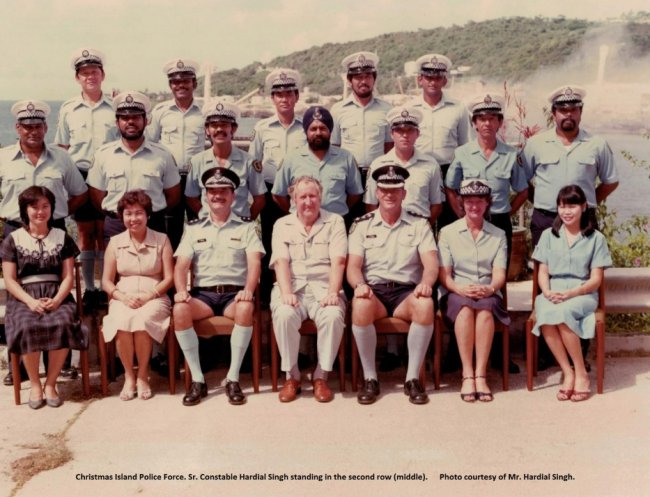 The Gurdwara Sahib was demolished in the 1950s when a roundabout leading to a new road to the upper part of the island was constructed.