Trawling through many old books, I have often come across short references to Christmas Island. These were observations or comments usually made by travellers, some quite eminent, as they sailed past that lonely little isle. In themselves, such observations did not contain enough information for a stand-alone article. Nevertheless, they are still most interesting to read and so I will add them to this page as I come across them.

Delightful day, fine wind as usual. This afternoon about five heard the cheering sound of “Land ho!” and I assure you I was on deck in a short time. Christmas Island (within four degrees of Java Head) had just opened to our view. It was thirty-six miles from us; but we watched it till we left it astern, about nine o’clock. If it had been in the daytime, we should have passed within six or eight miles of the island, and should have had a fine view of it. As it was, I should have thought it a black cloud, had I not known to the contrary. We shall probably see Java Head tomorrow night. Christmas Island is inhabited by that very interesting animal, the wild hog. It abounds, moreover, in cocoanut and lime trees. The sight of land made me think of the land I saw last, and gave me some unpleasant reflections. Three months to-day since I left home, and one year to-day since I went on the water for the first time (you remember that famous water party ?). Little did I think then that I should be tempted to cross the ocean!

Towards the end of June, 183–, the gallant barque C—-, of G—-, was bounding over the waves, borne by favourable and gentle gales. We had been three months out of sight of Old England, and were now expecting to see the land of our destination. The captain and I were in the fore-top-gallant yard for hours, in the hope of sighting the mountain tops. All was anxiety, after so long a voyage. Our fellow passengers, by over straining their eyes, imagined that they saw land long before we did; yet Christmas Island was first descried from the mast-head long after they had persuaded themselves that they had seen it from the deck. Belief is often the offspring of desire. How lovely did the woody slopes and sandy beaches of that lonely isle appear to us as we sped past it on our way to the far-famed Java!

Journey to China in the Ship “Huntress” – Journal entry

About half-past eight, A. M., just after breakfast, the captain shouted, “Land O!” and Christmas Island was in sight. We were about twenty miles off, and have not at any time today been near enough to see it very closely. Its form is very well defined against the sky; looks steep, and very long. About an hour after seeing the island, Bennet called to me,” Mr. Lowrie, just come and see how sweet the island smells.” I went out, and, sure enough, there was a very perceptible odor, somewhat, though not very much, like what one perceives in a large pine forest, though I think rather sweeter. However, I felt rather incredulous, for, though the breeze was blowing pretty fast off the island, yet we were nearly twenty miles off, and I could hardly believe it possible. So I went and examined the rails of the ship, to see that no mixture had been put there to create the deception. It is said that persons going to Ceylon are often deceived in this way, by having oil of cinnamon sprinkled on the ship’s side. However, there was no mistake. The odor evidently came from the cocoanut trees on the island, and I stood and snuffed it for a while with great satisfaction. The island is in Lat. 10° 32 S., and Long. 105° 33′ E., according to some of the Geographers, and about nine miles square, uninhabited, save by the birds, and some wild hogs, and having no anchorage. It is about two hundred and ten miles from Java Head, and two hundred and sixty or two hundred and eighty from Angier, at which latter place we shall not probably arrive for two or three days yet.

“Memoirs of the Rev. Walter M. Lowrie, missionary to China.”

88 days after leaving Boston, USA.
On the morning of the eighty-eighth day, our captain, who was a very skillful navigator, said to us: ” About noon to-day, if you look directly ahead, you will see land: it is Christmas Island; a small island about a hundred miles south of the western end of Java.” All eyes were in requisition. I sat on the forecastle-deck, and was the first to discover it. Sure enough, there it was, a dim, cloud-like line, resting on the distant horizon, under the clear, blue sky; for it was a bright, beautiful day, in perfect keeping with the joyous event. A moment more, and the welcome cry of Land! land !” was ringing through the ship. Hands were clapped for joy, while faces were beaming and hearts were beating with an ecstasy of delight. The land at first looked like a heavy mass of dark-blue clouds in the distance, resting on the heaving bosom of the ocean. Then it became more and more distinct, till at last it loomed up before us a high, rocky mountain islet, partly covered with a scanty growth of diminutive trees. We saw multitudinous flocks of birds about the island, and the waters near it were seen to be teeming with fish; but they could not be induced to bite a hook; probably because we had no fresh bait.

“Five years in China. With some account of the great rebellion and a description of St Helena” by Charles Taylor M.D. 1860.


A few days after leaving the Straits of Sunda, we came in sight of Christmas Island, off which we were becalmed for three days. It is about six leagues in extent each way, and rather hilly; presenting to the eye one mass of dark green trees, even thicker than those of the other islands we had passed. It is uninhabited, but is said to contain plenty of deer and wild hog. There is no anchorage, the lead giving eighty fathoms close in shore; but parties have occasionally landed there on shooting excursions, whilst becalmed near its shores. A light wind, at last, enabled us to lose sight of Christmas Island, of which we were getting heartily tired. 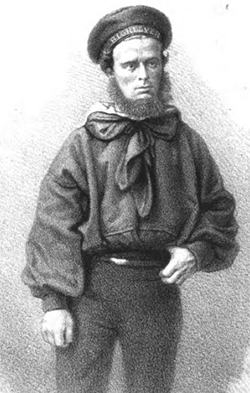 April found us still voyaging onwards. On the 12th we saw and passed Christmas Island, at the entrance of the Strait of Sunda. It appeared prodigiously wooded, and rose to a good height from the water. It is not very large; apparently, I should say, about the size of the Isle of Wight; it is about two hundred and eighty miles from Anjeer Bay, and directly in the route through the Strait. Here we caught a bird of a strange character, web-footed, and with plumage of snowy whiteness. There were plenty of birds also hovering at a great height above the ship, called, nautically, “boatswain birds, perhaps from their uttering a note somewhat like that functionary’s call. They were exceedingly pretty, having beautiful white diamond-shaped feathers in the breast, and long forked tails; they glide about with very graceful motions, and often follow a ship for miles.

“A sailor-boy’s log book from Portsmouth to the Peiho” Edited by Walter White 1862.

On the 11th, with all sail set and with the spinnaker still abroad, Christmas Island, about noon, came into view one point on the starboard bow. Before night it was abeam and distant two and a half miles. The surface of the island appeared evenly rounded from the sea to a considerable height in the center. In outline it was as smooth as a fish, and a long ocean swell, rolling up, broke against the sides, where it lay like a monster asleep, motionless on the sea. It seemed to have the proportions of a whale, and as the sloop sailed along its side to the part where the head would be, there was a nostril, even, which was a blow-hole through a ledge of rock where every wave that dashed threw up a shaft of water, lifelike and real.

It had been a long time since I last saw this island; but I remember my temporary admiration for the captain of the ship I was then in, the Tanjore, when he sang out one morning from the quarter-deck, well aft, “Go aloft there, one of ye, with a pair of eyes, and see Christmas Island.” Sure enough, there the island was in sight from the royal-yard. Captain M— had thus made a great hit, and he never got over it.