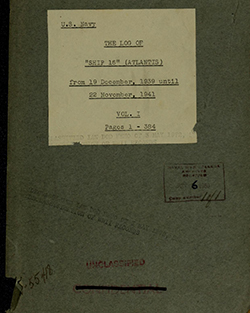 There is a very interesting entry in the log of “Ship 16” (Atlantis) dating 15th October 1940 that you can read below.

The Atlantis was a German auxilliary cruiser – a commerce raider that was in the waters off Christmas Island. In his log, Captain Bernhard Rogge wrote of considering a bombardment of the island but then abandoning the plan. It appears that a Japanese phosphate vessel in Flying Fish Cove prevented a potentially devastating attack. A close call indeed, to which the islanders would have been oblivious.

On 15 October the Norwegian vessel “Ven Roh” went to Christmas Island to take on a cargo of phosphates. I gave up the plan to attack and either capture or sink the vessel in the harbor “Flying Fish Cove”, because at first I did think that we should get a steamer off the Sunda Strait. In order to keep up the deception of a southerly course, in case our intended victim had happened to send a Q-message*, I planned to go on to attack Christmas Island and then make a sally far to the north. It would have been essential for us to leave the sea area off the Sunda Strait immediately after the attack on Christmas Island. When it became clear that the Sunda Strait was not a very promising area, a Japanese vessel, the “San Francisco Maru” replaced the Norwegian in the island’s phosphate port and an attack was therefore out of the question.

Although in the light of the aims of auxiliary warfare, an attack on Christmas Island might be a far more effective success than the sinking of several thousand tons or shipping space (one may presume that a bombardment of the island would become known the world over and would spread fear of a repetition in every small place on the coasts of Sumatra, Java, Australia, in Reunion, etc., while the loss of a cargo vessel is known only to those directly concerned), I shall abandon the plan for the time being. I consider it a greater advantage to appear unexpectedly at the approaches of the Gulf of Bengal. If opportunity arises after the close of the auxiliary cruiser operations in the region of the Equator, I shall carry out the plan while we are on our escape route to the south.

The German auxiliary cruiser Atlantis (HSK 2), known to the Kriegsmarine as Schiff 16 and to the Royal Navy as Raider-C

Commerce raiders do not seek to engage warships, but rather attack enemy merchant shipping; the measures of success are tonnage destroyed (or captured) and time spent at large. Atlantis was second only to Pinguin in tonnage destroyed, and had the longest raiding career of any German commerce raider in either world war. She captured highly secret documents from SS Automedon. A version of the story of Atlantis is told in the film Under Ten Flags with Van Heflin appearing as Captain Rogge. ~ Wikipedia